What is Pectus Excavatum? 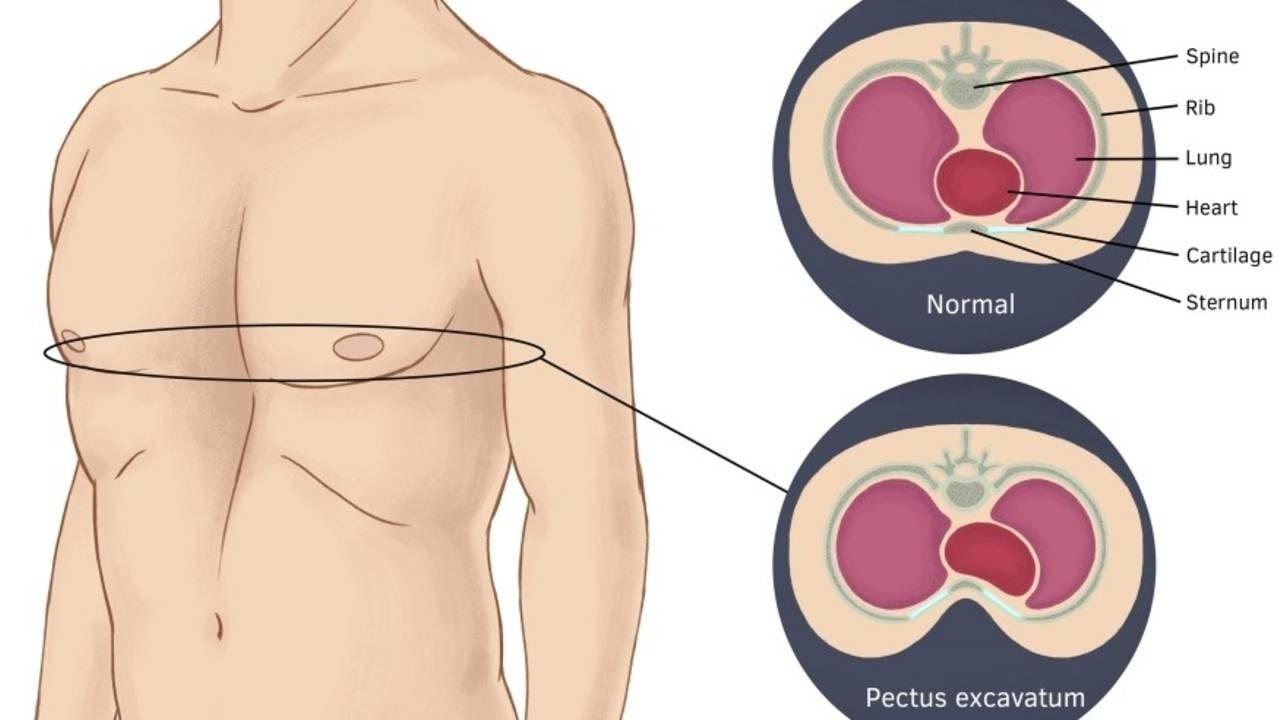 Pectus Excavatum is a deformity where the chest wall caves resulting in a ‘hole’ like indentation in the middle of the chest. This indentation pushes the ribs out and causes flared ribs & a potbelly.

Whilst the sunken chest is often noticeable at birth, the severity typically worsens through adolescence.

The pectus defect is typically symmetric but asymmetric cases are also quite common.

The magnitude and shape of the indentation is unique to each individual.

The severity of pectus is often classified via the Haller Index which is a number determined by dividing the distance of the inside rib cage (at the level of maximum deformity or at the lower third of the sternum) by the distance between the sternal notch and vertebrae. These distances are calculated via a radiographic scan of the chest. A normal haller index is around 2 or less, for pectus excavatum sufferers this number is increased, the higher the number the deeper the indentation. The following values are used:

The scan is often used to determine if the patient needs surgery with numbers of 3.2 and above often being recommended for surgery. I personally disapprove of going strictly by a number on the haller index to determine if you should or should not have surgery.

I think an individual should get surgery if they: Have physiological problems that are a health concern or are so self conscious of their condition that it is the only way to become more confident in their bodies & have already improved their body through exercise.


I have never had my pectus measured using the Haller Index because I don’t  see the point. I don’t need some scan to give me a number to quantify the severity of my pectus. I know how deep it is from looking at it.

How common is Pectus?

There is some discrepancy with statistics about the prevalence of pectus because many cases do not get reported, however from a variety of data sources the average seems to be that it occurs in 1 in every 300 people making it a relatively common deformity. Pectus Excavatum is far more common in men than women with an estimated 5-9:1 ratio.1

So what causes Pectus?

Researchers are unsure but there is a high genetic carry over with a one study reporting 37% 2and another reporting 47%3of cases having a first degree family member with the condition. Therefore there clearly is a high genetic component to Pectus. I for one can vouch for this as my Dad has Pectus Carinatum and then I was born with Excavatum. His chest goes out mine goes in.

Pectus Carinatum is a very similar condition to Excavatum the only difference being that rather than the sternum collapsing in it protrudes out. Pectus Excavatum is far more common than Pectus Carinatum with a 9:1 ratio of all ‘Pectus’ cases.  4

Pectus generally has a negative physiological & psychological impact on the individual with the condition.

In more severe cases the physiological effects of pectus can be a health concern due to the indentation causing problems with the heart & the lungs, affecting normal functioning of these critical organs. Chest Pain, Dyspnea (shortness of breath) & Syncope (temporary loss of consciousness) are three common physiological effects of pectus. Surgery may be required in some of these circumstances if it is a major health concern. However, even with mild cases the lung & heart ‘s function is often, to a small degree, impacted as well.

Typically though, this impact is of very little health concern and is more of a performance concern as its results in a limited lung capacity, below average cardio-respiratory fitness & early onset of shortness of breath. I for one can vouch for all of the above, I have always sucked at cardio, I run out of breath very fast. As an adolescent I would often get light headed and feel like I was about to faint & I occasionally would get chest pain.

Furthermore Pectus often correlates with other bone abnormalities such as scoliosis & kyphosis of the spine. In fact a recent 206 participant research study showed that an associated anomaly was found in 27.1% of pectus cases.5

These spinal disorders can cause other physiological problems such as back pain. Kyphosis itself actually can exacerbate the cosmetic extent of the pectus condition. Before I started my exercise regime, my posture was very kyphotic but after I began to exercise and do stretches I managed to correct this which immediately made the condition look much better (I will talk more about how this works later).

Furthermore, I also was born with twisted hips and pigeon toes which is another interesting correlation with PE as the 206 participant study quoted above also showed that 8.3% of PE Patients had a foot anomaly.

Another postural pattern commonly associated with Pectus is Anterior Pelvic Tilt (APT) which is characterised by a forward tilted pelvis resulting in a prominent arch in the lower back & often lower back tightness. APT also exacerbates the cosmetic extent of pectus by enhancing the appearance of the protrusion of the pot belly and ribs. Similarly to the above, I had APT but through exercise managed to improve this and thus improve the look of my condition.

Marfans syndrome is another medical condition that has a high correlation with Pectus Excavatum and may in some instances actually cause Pectus. Marfans syndrome is a connective tissue disorder which causes skeletal defects such as long limbs, chest abnormalities (pectus), curvature of the spine, crowded teeth & some other structural abnormalities. Similarly to pectus, Marfans syndrome can also affect the heart & the lungs. There are some other connective tissue disorders which are often associated with or causal of pectus  such as Noonan Syndrome and Loeys-Dietz Syndrome.

I know it all sounds gloom & doom right now but there are some positives to the above. Long limbs and large feet & hands creates amazing swimmers. Hence the correlation between Pectus sufferers with an amazing swimming capacity. Look at Cody Miller for example. Furthermore, we should feel blessed that there are solutions to our condition, surgery and exercise.

If you want to start following a program specifically designed to make your pectus less noticeable & receive coaching from Riley Byrne (the worlds only Pectus Excavatum specialised Personal Trainer) then go to www.fixpectus.com/ to apply.